The Pacific Northwest is one dreamy place. Maybe it rains a lot, but man, it sure does some beautiful things – take a look at all the GREEN. I’ve been to Portland and Seattle, but I made my first trip further north to Canada this spring. My husband was in Vancouver for work, so I took the opportunity to visit for a long weekend. Maybe I’m easily impressed, but give me all the lush greenery, beautiful streets, trendy coffee shops, great food, and vintage stores – and I’m set.

As I’m not a local or expert on the city, I can only share my itinerary. But if I do say so myself, I’m pretty great at organizing travel plans for quick trips – squeezing in as much as I possibly can. And since this trip was so short, I was more interested in getting a real feel for the city instead of wasting time on tourist attractions. So I checked out some guides from locals and got a list of recommendations from my friend Jamie (who visited the weekend before). Here’s what we did!

Disclaimer: All photos taken on our phones. I wish I had the DSLR with me, but alas, this will suffice. 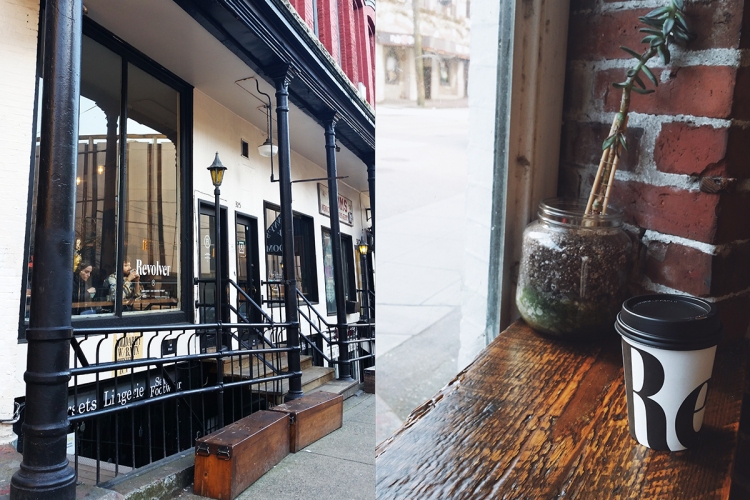 I arrived late Thursday night, ate dinner at Flying Pig, and had Friday in the city by myself. If you remember, I traveled solo in Europe last summer, so I was more than prepared.

We stayed downtown (our hotel was nothing to write home about), and it was a good central location. First things first, Friday morning I grabbed a latte at Revolver, which was my favorite café of the trip (both the aesthetics of the shop and the taste of coffee). They’re not open Sundays, but make sure to squeeze in a coffee break here if you’re visiting.

Next up was Cartems Donuterie, which looks pretty inconspicuous from the outside, but don’t be fooled! I tried the Earl Grey cake donut which was so pretty and dang delicious (but rich – don’t let your eyes get bigger than your stomach when ordering!). 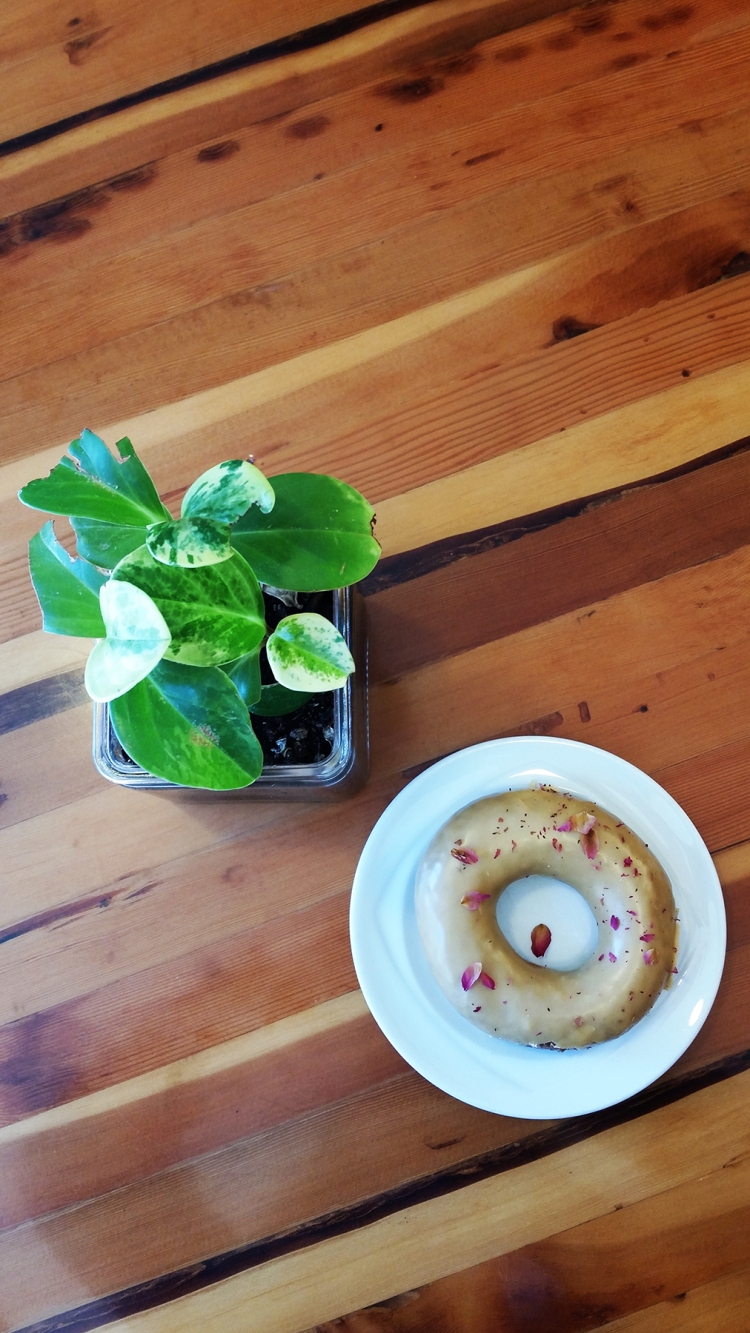 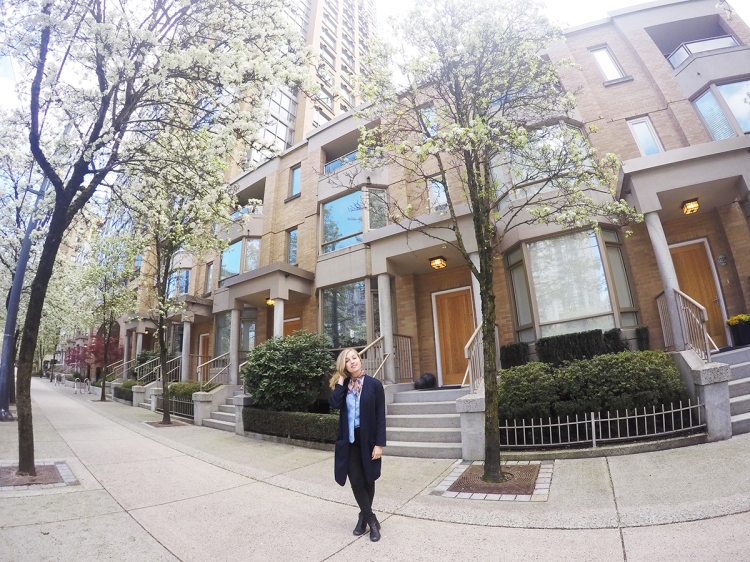 Look at these streets! Springtime was in full bloom, and it made the city feel just magical (I was literally smiling as I walked around). If you’re wondering what sorcery I used to take these photos of myself, I have a JOBY GripTight GorillaPod – XL, which you can use with either a GoPro or phone (with the respective attachments). I used this method a lot while in Europe. 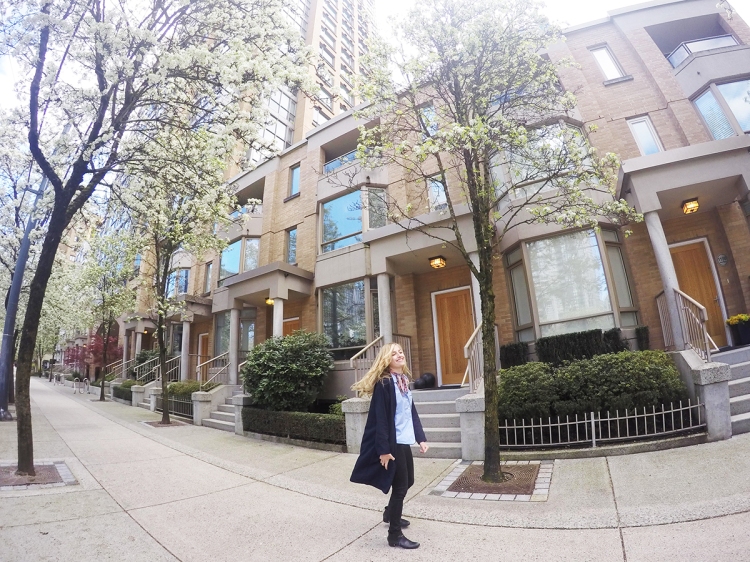 A big item on my solo adventure day was to do some thrifting. If you haven’t used the “star” feature on Google Maps, I highly recommend it. It’s exactly as it sounds – you “star” locations to be saved on your map (which you can download to your phone if you’re traveling without service). It makes traversing a city super convenient – you can see all your “must-see” spots at a glance and plan your route from there. Anyway, I had starred a bunch of vintage and thrift stores to check out as I made my way across the city.

I started at My Sister’s Closet, which is a small, pretty generic thrift store. But proceeds go to battered women, and I scored a turtleneck for $5. 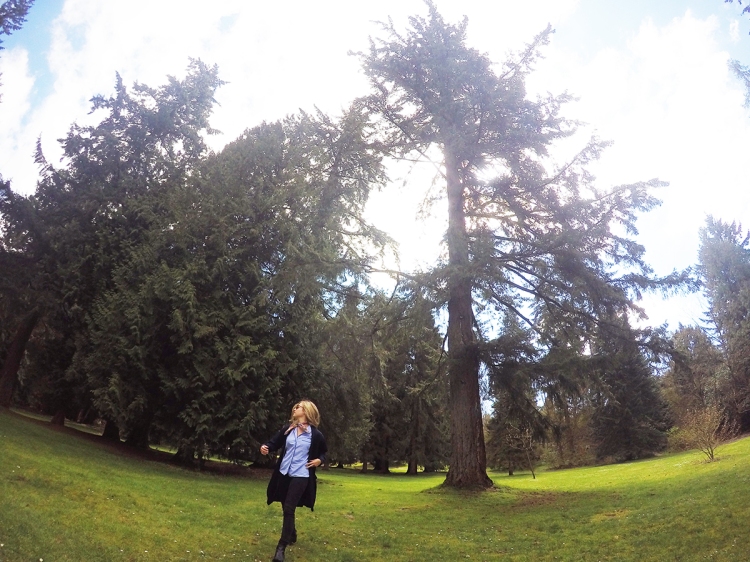 No travel is complete without some nature, so I made my way down to Queen Elizabeth Park. I may have underestimated the amount of walking I’d do this day.

In retrospect, I wish I had visited this park in the early morning or evening – because look at these CHERRY BLOSSOMS. They were blooming and beautiful, but there were also a lot of tourists snapping photos, and flowers in mid-day sun don’t photograph super well. 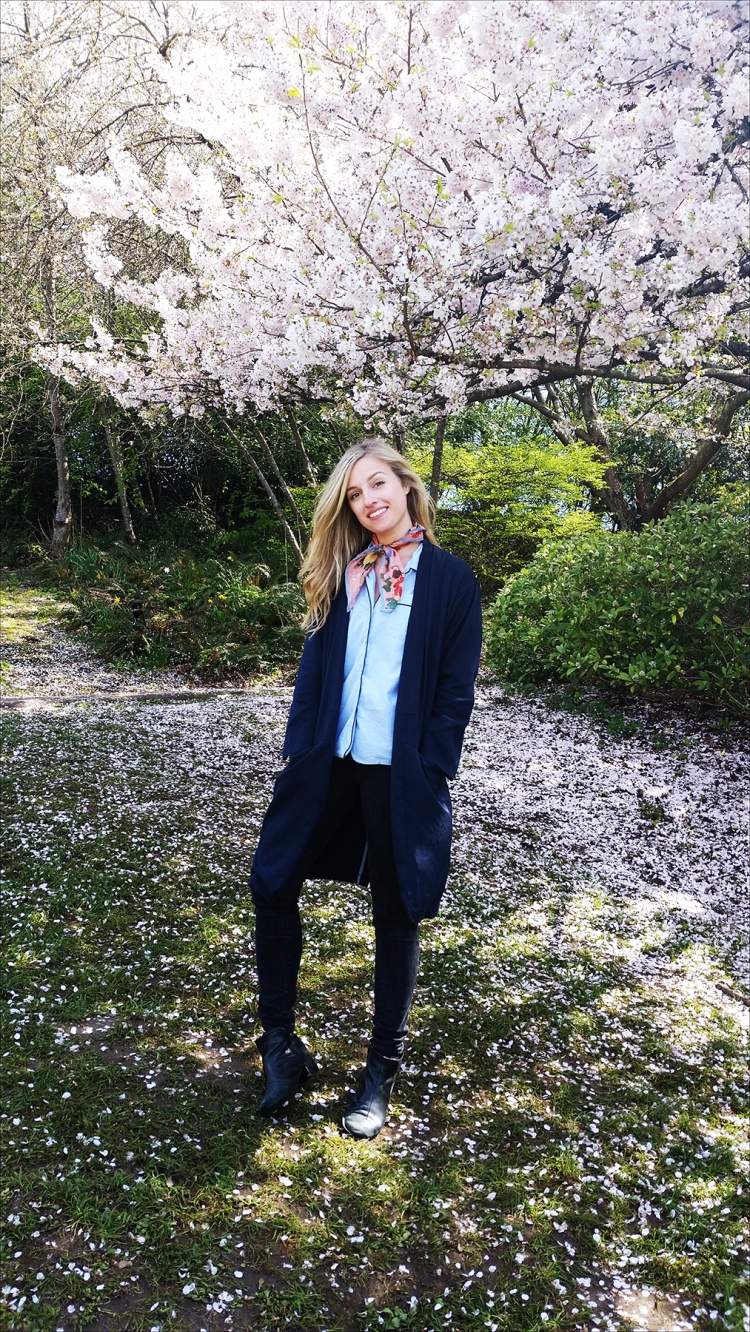 The rest of the day I spent shopping on Main Street. I scored the yellow reversible coat below for $25 from True Value Vintage, which I just happened to stumble upon (this is why you should walk a city as much as possible). Sadly, the store front is closing down, but maybe their Etsy will stay open?

Next I popped into Giving Gifts & Company, which was next door and filled with goodies from local businesses – cards, prints, soaps, jewelry, etc. I picked up some Mother’s Day gifts from here, and at the suggestion of the woman working, I got some fish tacos from The Fish Counter.

Traveling without phone service is a little more challenging, so it was about time I found a coffee shop to refuel and use WiFi to get in touch with my husband. I rested in 49th Parallel, and though their almond milk is made from scratch (with dates), I realized I’m more of a fan of the generic store bought stuff (sue me). But hey, my drink is an almond milk latte, so the almond milk is a big factor at play here. 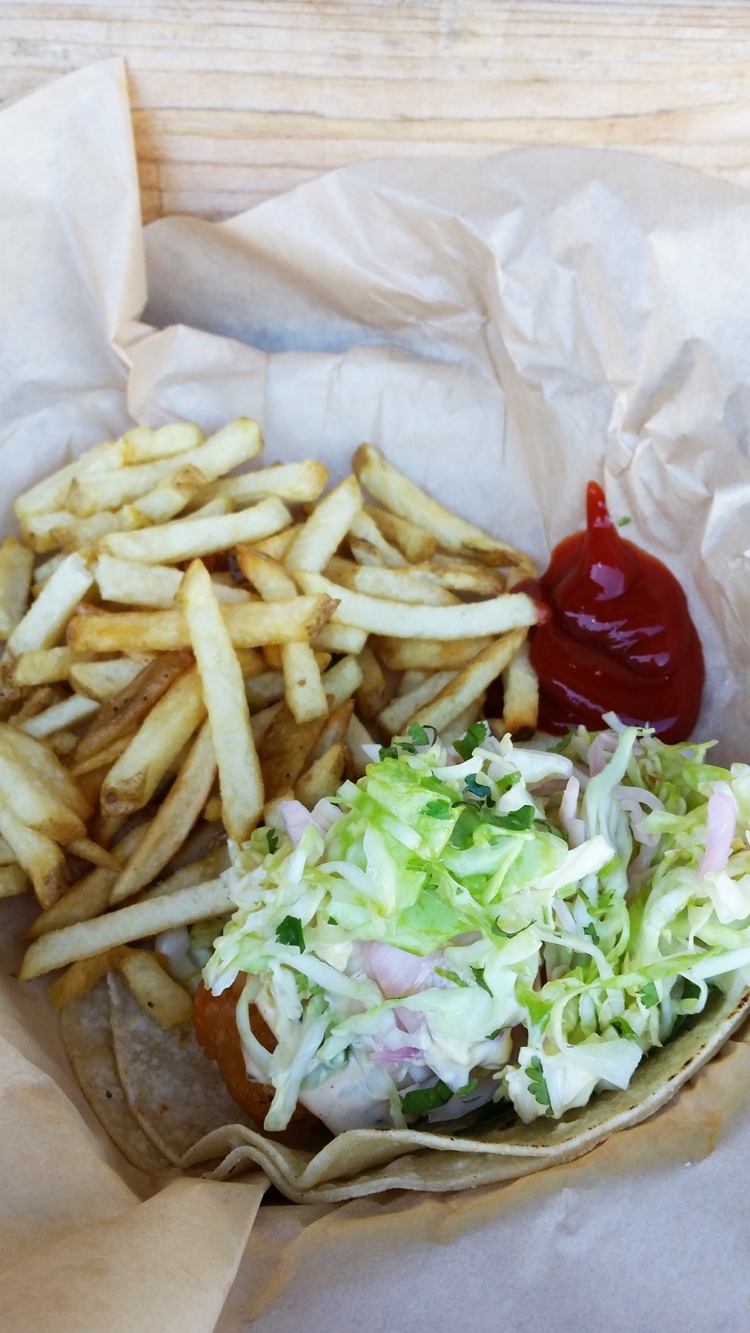 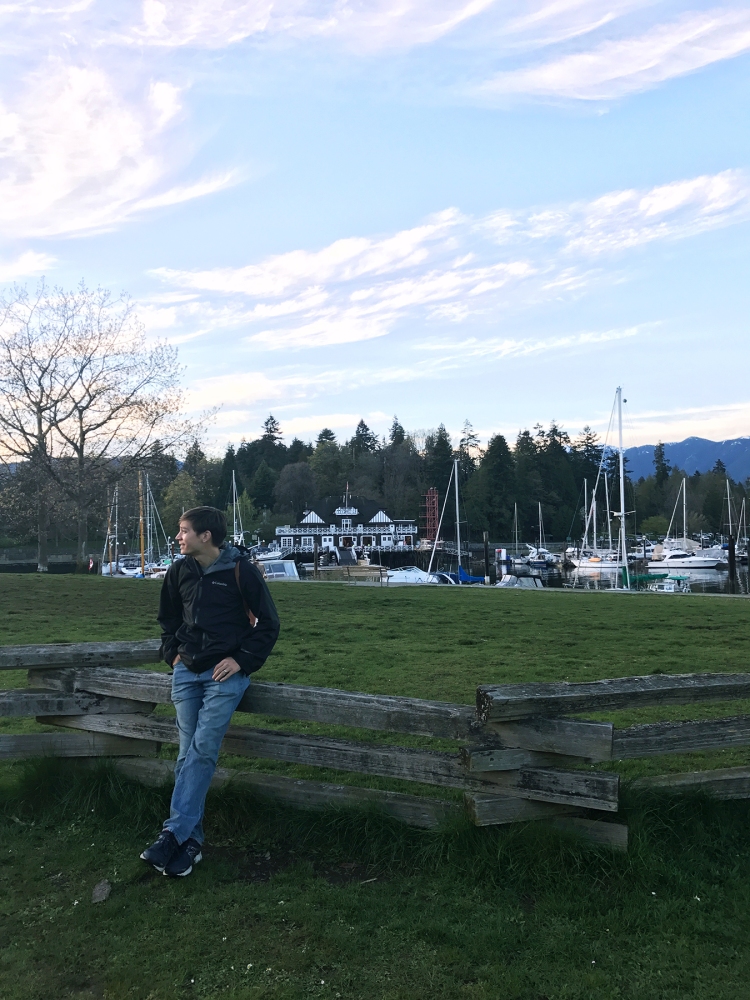 Upon finally meeting up with my husband, we had a really yummy dinner at Guu Original Thurlow (they have a bunch of locations), which is Japanese cuisine. I definitely recommend this spot for dinner! Then we hopped on the bus to see a little bit of Stanley Park at dusk. 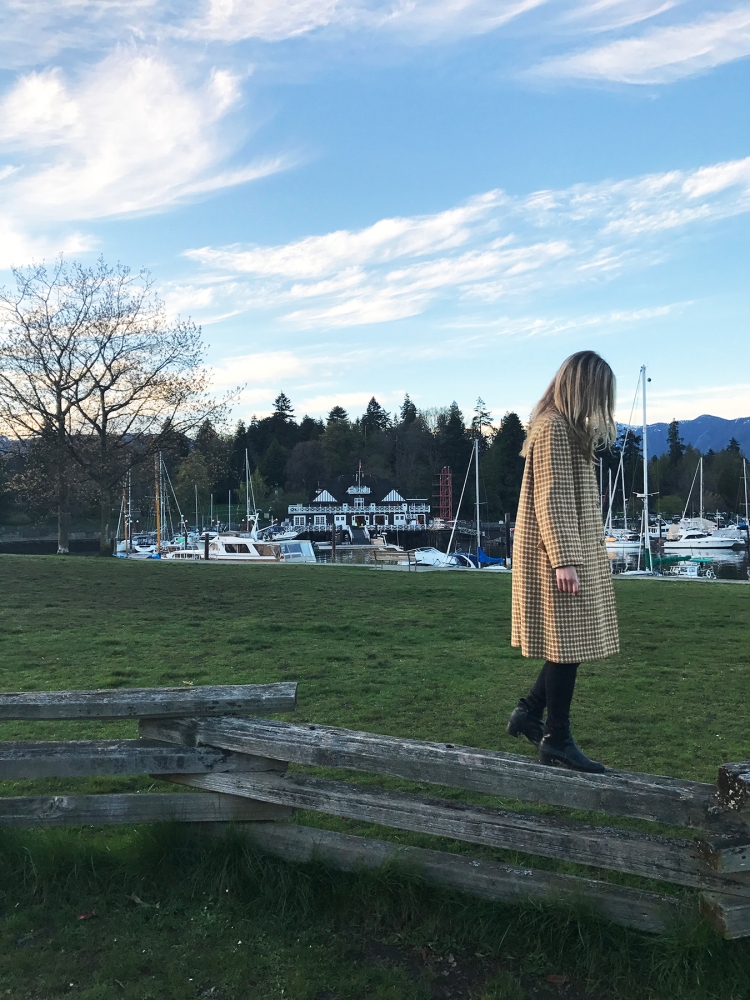 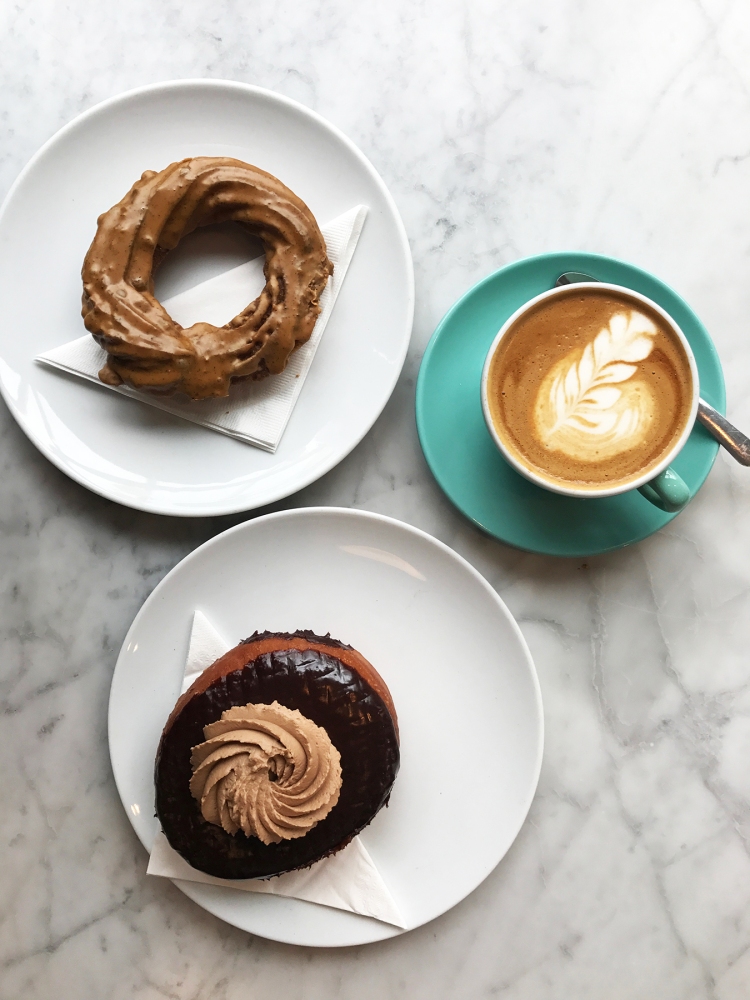 The next morning we stopped in 49th Parallel again (their Mount Pleasant location) to try Lucky Doughnuts. I ordered another latte (this time with whole milk – much better choice), and we had a couple donuts. The Cold Brew Cruller and Peanut Butter Chocolate donuts are pictured above. Their tables are marble and dishes are turquoise, so yeah, I was sold. 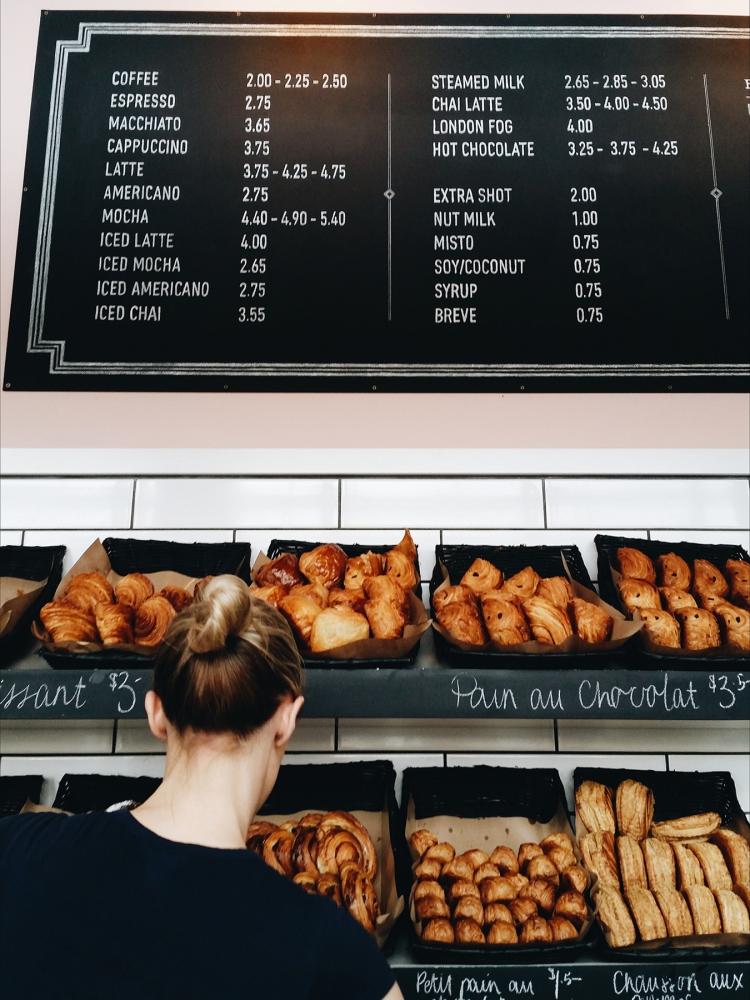 We couldn’t stop eating then (isn’t this how everyone plans their trips?), so we made a quick stop in Beaucoup Bakery & Café for another coffee and a couple pastries to go.

And OK, we couldn’t avoid all the tourist traps. I wanted to visit the hat store on Granville Island, so we walked through the market (which is actually really plentiful), grabbed some sausages, and purchased a new hat! The owner at Granville Island Hat Shop was honestly the nicest. 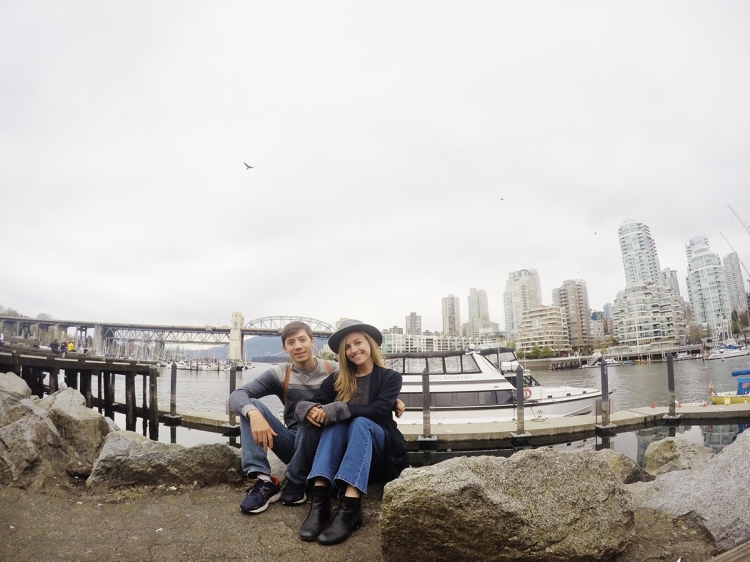 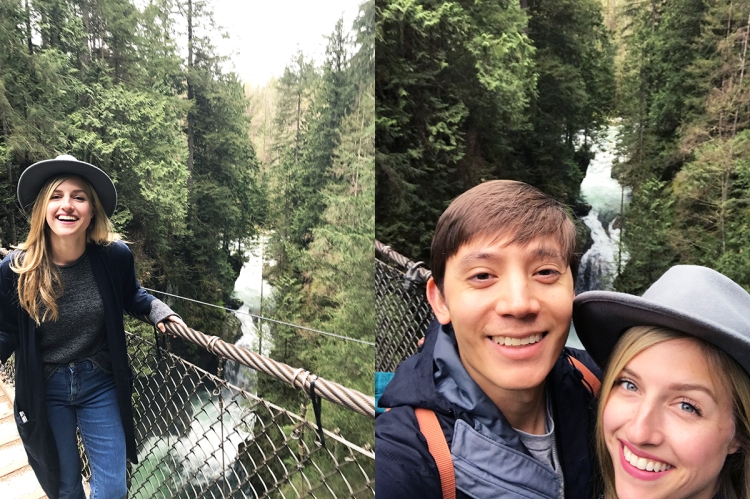 Saturday we rented a car, so we could travel a bit further. We decided to do the Lynn Canyon Suspension Bridge instead of Capilano because it’s free and not as crowded (I try to avoid hoards of people as much as possible). To be honest, we were a little nervous walking across, but look how beautiful it is! 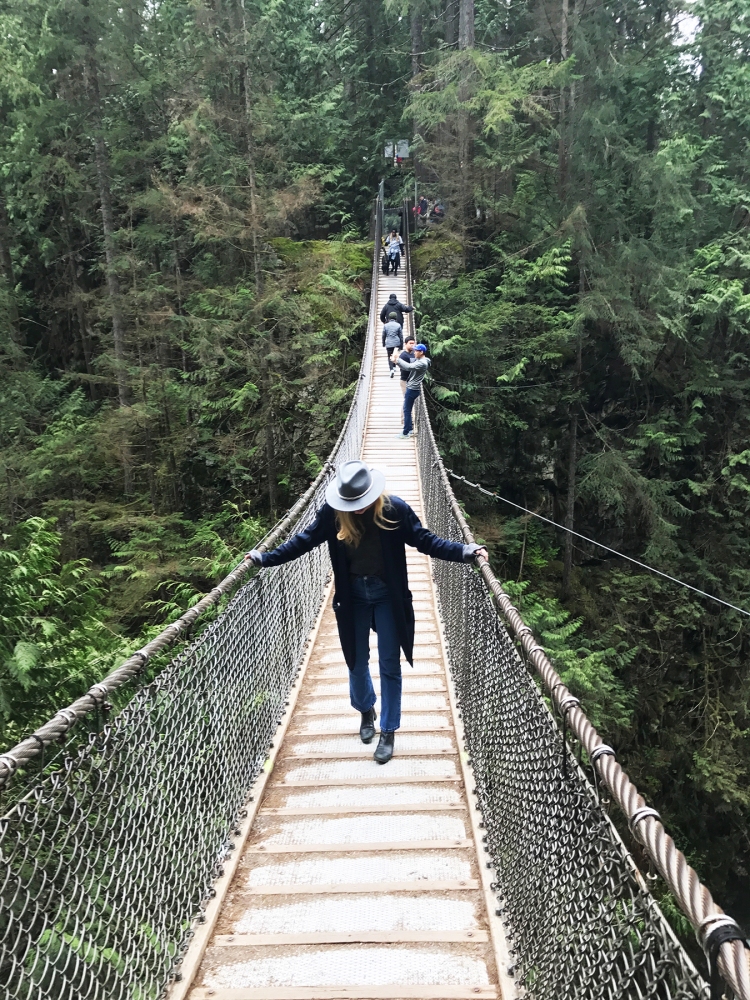 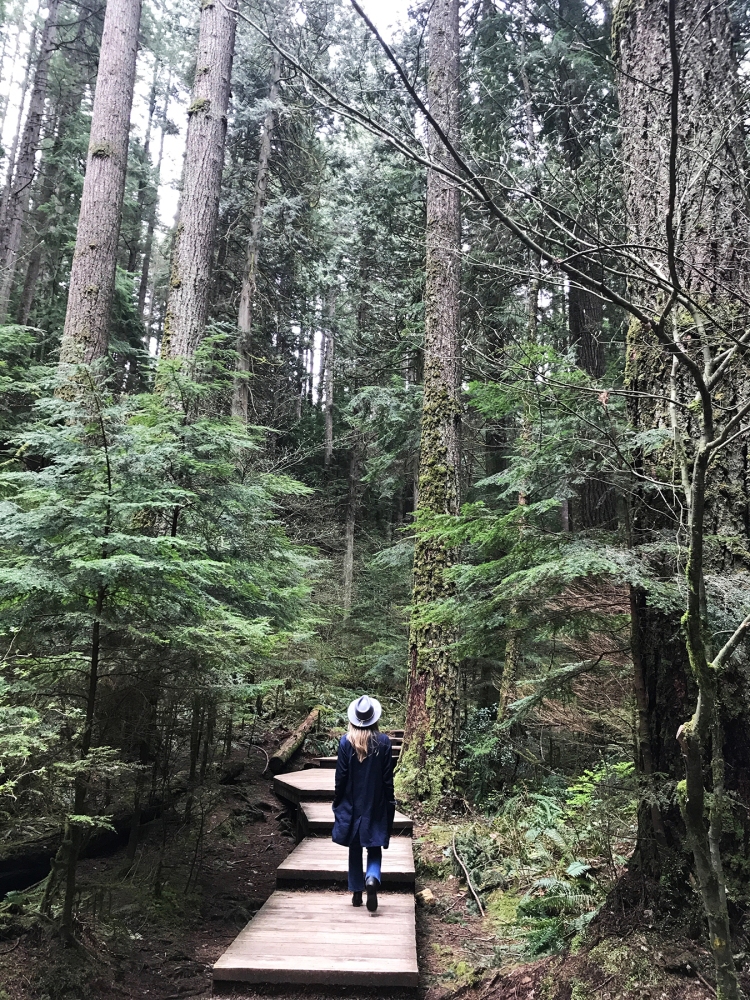 I was clearly in my hiking clothes, so we took a detour down one of the hiking paths. Worth it. 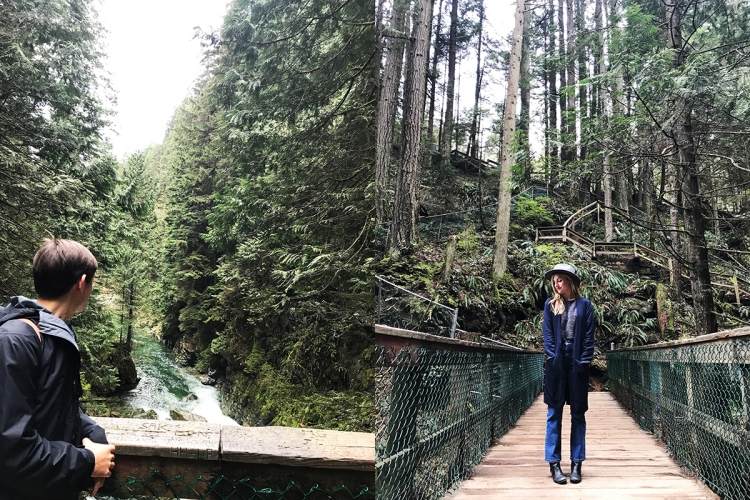 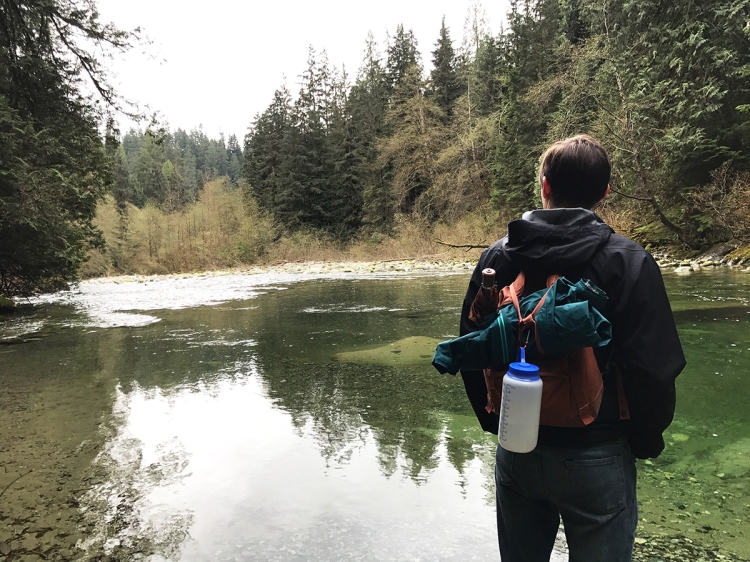 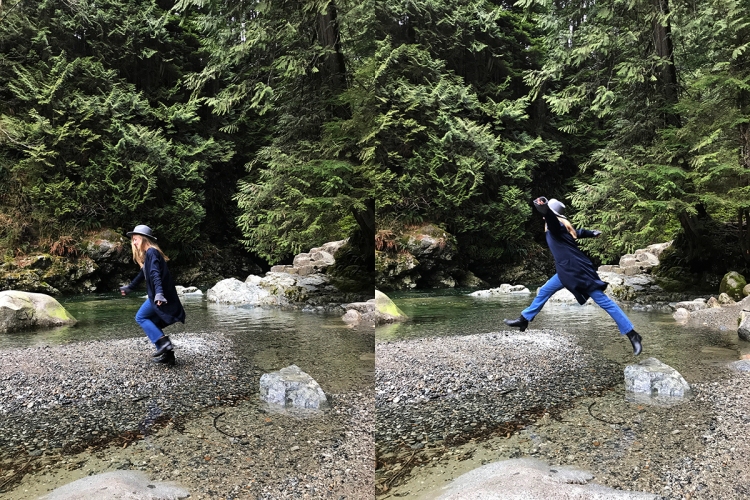 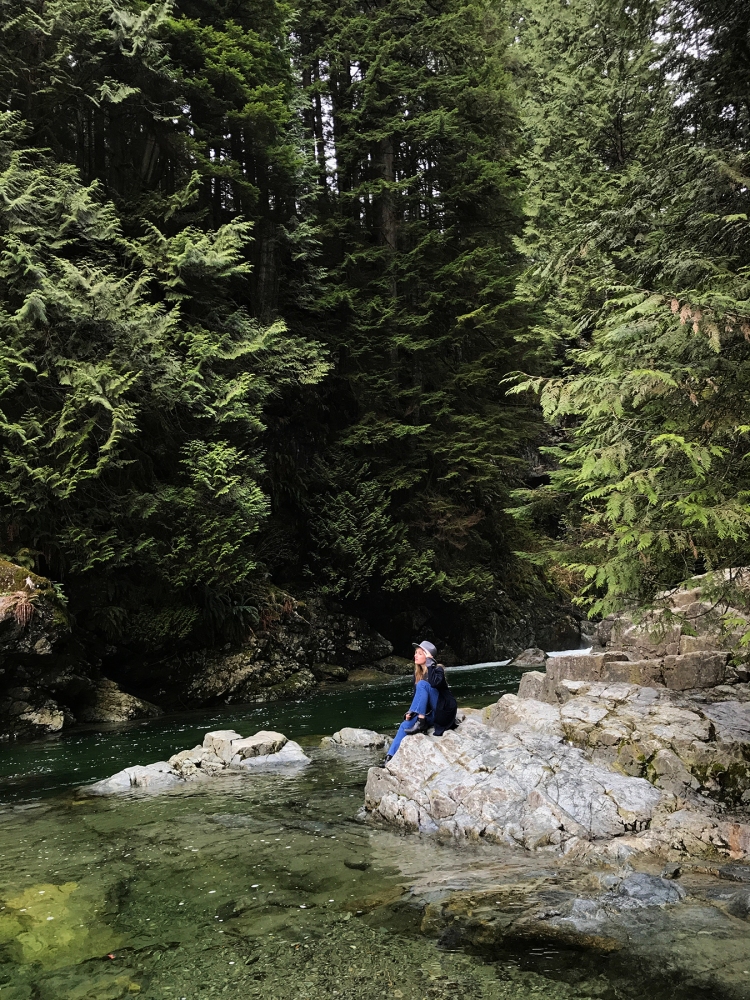 Can we please keep talking about how beautiful the PNW is?! 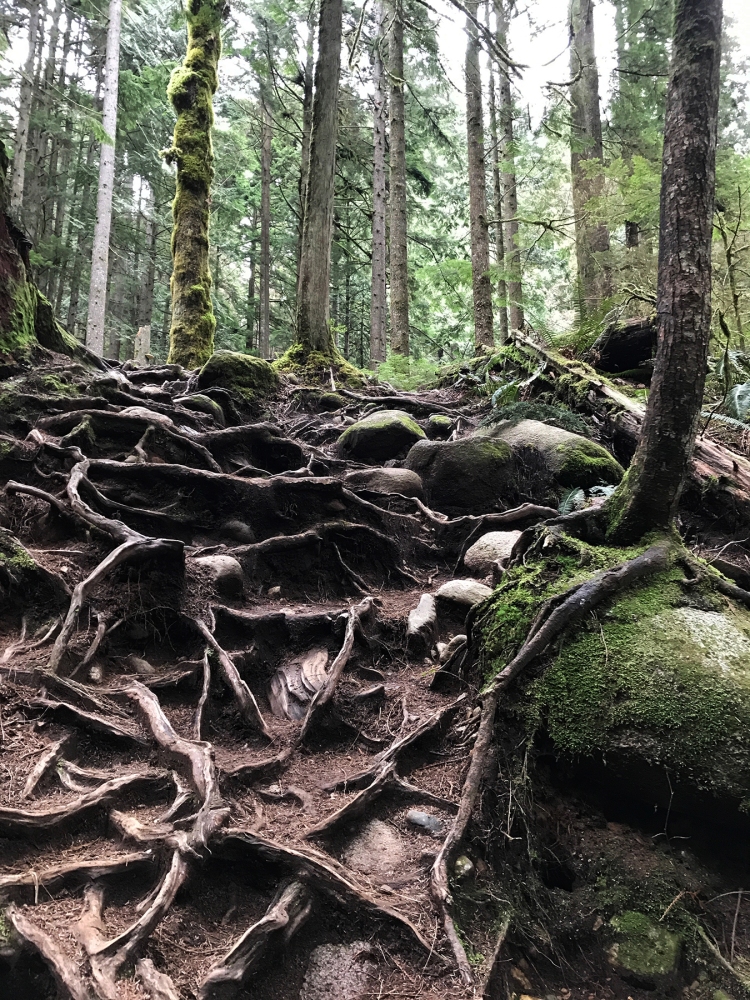 My husband is a big fan of aquariums, so of course we had to visit the Vancouver Aquarium situated in Stanley Park. We spent less than 2 hours in there, so it’s not super time consuming (though a little pricey) and would be a great activity for kids. I always love watching the tanks of jellyfish – so mesmerizing.

They also had some rescued cetaceans that were really fun to watch swim around. And a sloth! He was asleep, but we could just make out his furry self hiding in the tree tops. 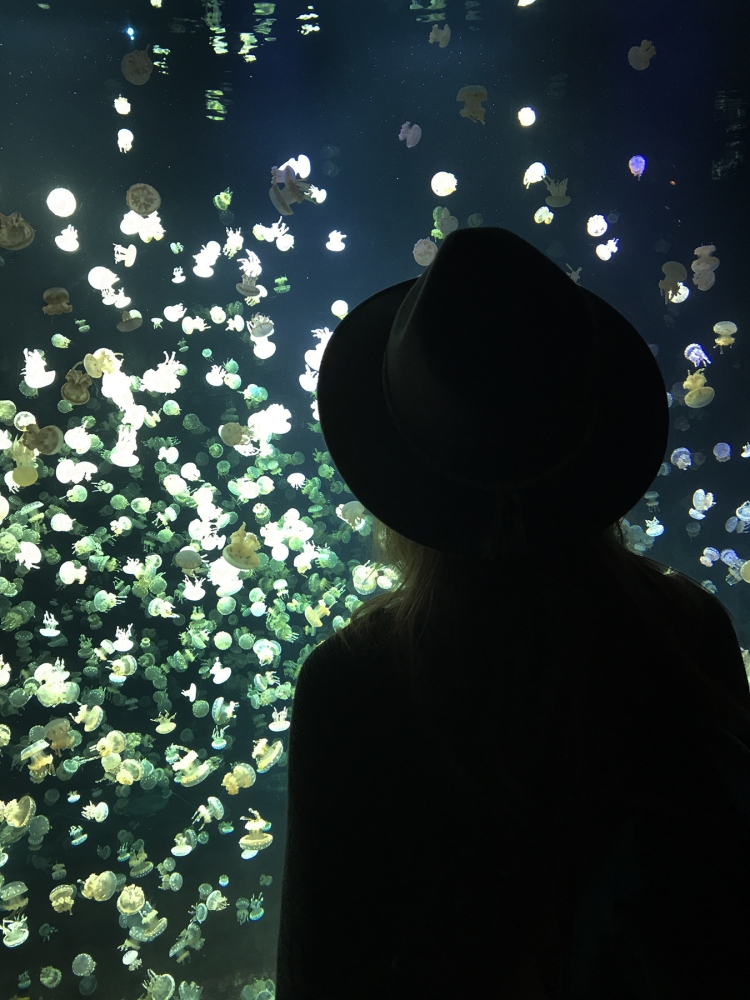 At this point I would soon be hangry, so we hopped into a restaurant we had passed called the blind sparrow for wine and a charcuterie board.

Afterwards we drank more coffee (third of the day!) at Milano and ate ice cream from Earnest Ice Cream instead of having dinner. Naturally. 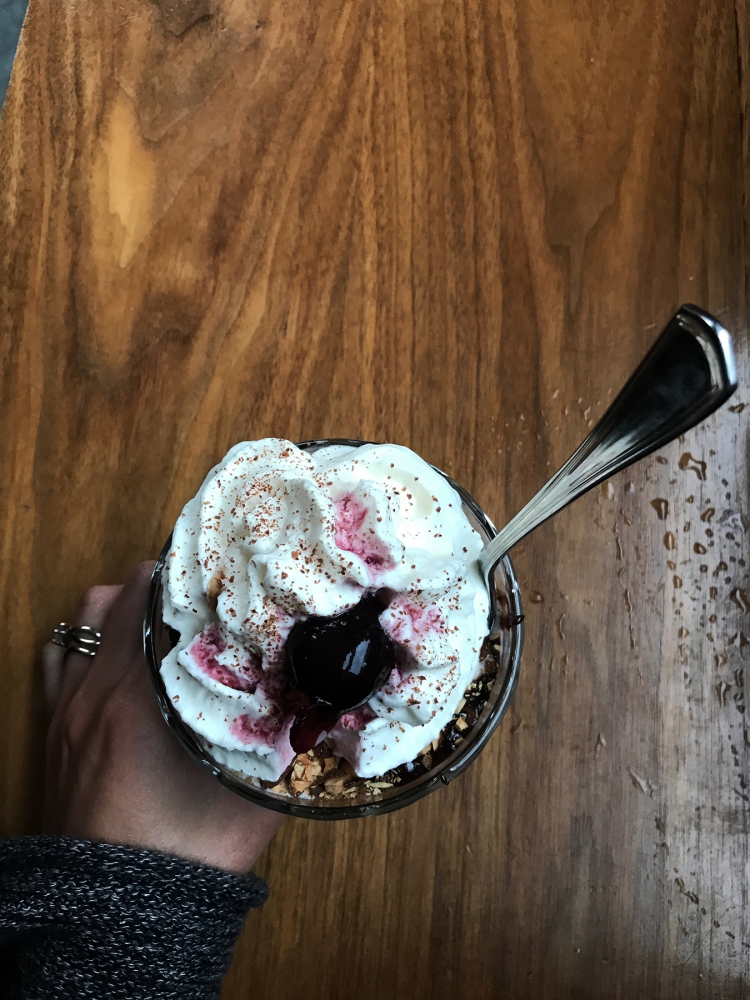 We’re lame, and since we were go-go-go during the day, we called it an early night and relaxed in the hotel (we haven’t had cable for 4.5 years, so just getting to watch TV is a vacation treat!). 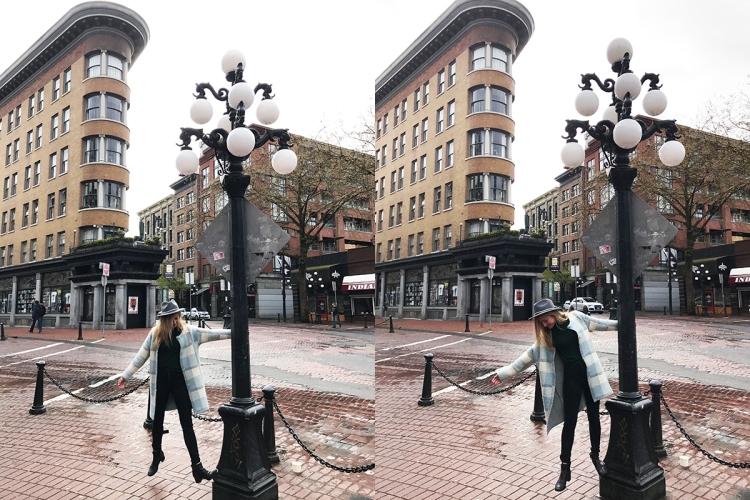 Our flight was early on Sunday, but we had enough time to sleep in, walk through Gas Town, and have brunch at Tuc Craft Kitchen. I had their Elevated Diner, which I loved. Make a brunch reservation here! 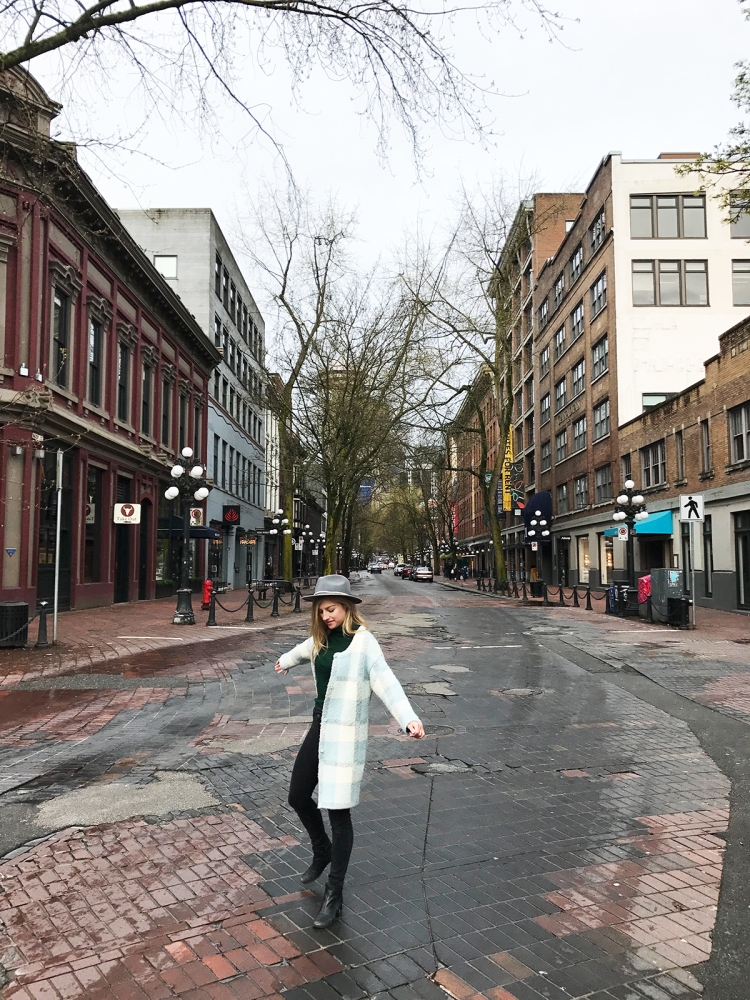 Dancing in the streets, as one does. 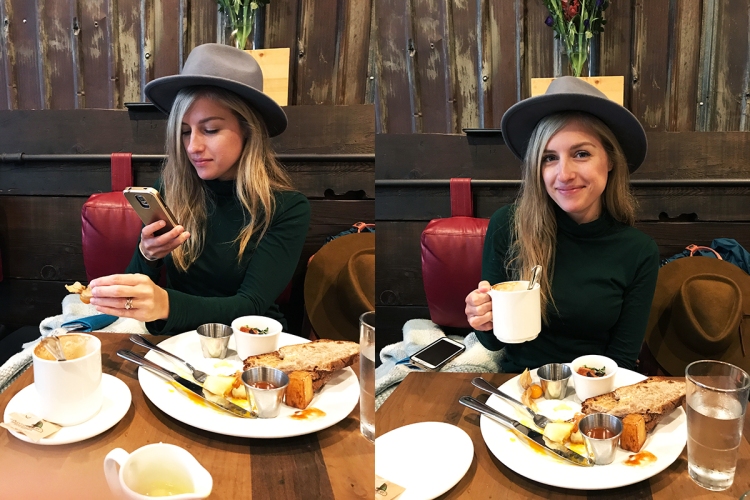 So, there you have it! I’m all about cozy, slow paced towns filled with good food, good coffee, and good people. Adorable streets and cheap vintage are the name of the game, and I couldn’t have been happier.

If you’ve visited Vancouver or, even better, live there – let me know your favorite spots! I’m sure we’ll make it back – especially to explore more of the great outdoors.

P.S. Upon my arrival back to LA, I was pleasantly surprised to see a new coffee shop open up right next to my work, and they roast – you guessed it – 49th Parallel coffee. What are the odds?!

P.P.S. Here’s our recent visit to Yosemite and a San Francisco travel video if you missed it!