Warning: this is a long one.

I just got back from my first trip to Europe – and my first time out of the country since I moved back to it at almost 8 years old (military brat living in Japan). That in itself was astonishing to me and made me realize just how much I really need to get the heck out of here and see more of the world.

To say I was excited for this trip would be an understatement. I planned and planned and researched and researched – after all, I wanted this trip to be perfect and magical and everything I had every dreamed. I wanted to get the quintessential experience in each city I visited. I’d also be traveling solo for a few days – my first time to do so – and in a foreign country at that. I was excited and nervous (#introvert) because even a year ago it’s not something I probably would have ever done. My mom was concerned (of course), but when would I get the chance to do something like this again? I was looking forward to the opportunity to do exactly as I wanted, on my own time.

Visiting Europe was an experience for sure. Happiness, wonderment, sadness, loneliness, fear, exhaustion, and everything in between. And since I took a zillion photos (and video to come!), I’ll make a separate post for each city. After all is said and done, I’ll share my thoughts about traveling solo (along with my film photos once those are developed). If you’re going to visit these cities, I hope this will help with your planning. I’ll start with our first stop, and my favorite of all the cities, Copenhagen.

I never in my life had thought about visiting Copenhagen. To be honest, I didn’t even know what country it was in (Denmark). But my husband was planning a kayaking trip through the Fjords in Norway, and since round trip tickets were just over $400 each, I decided, why the heck not?

Since it was our first stop, and I’d be there the longest, I spent the most time planning my Copenhagen itinerary. I’m definitely one of those crazy planners with an hour by hour itinerary without much room for spontaneity, but that’s how I like it. I like doing my research, so I can get the most out of my travels. And I like feeling fairly assured that I will enjoy every aspect of it. I did leave a day open in Copenhagen to just wander the city. 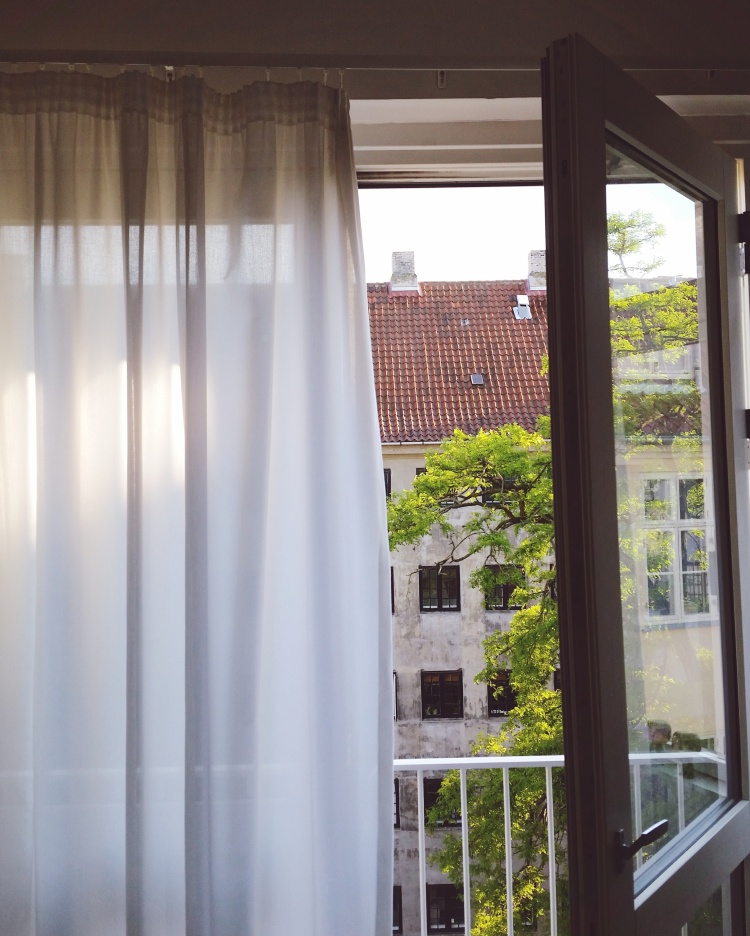 It started with the AirBnB. I had never used it before this trip, but I was quite adamant about not staying in a hostel (not for me), and something about living like a local (versus a hotel) felt very dreamy to me. On the other hand, I’m a germophobe and wasn’t sure how I’d feel about staying in a stranger’s home, but I loved it.

We stayed in the Indre By district (center/downtown Copenhagen), and it was the perfect location. We were a little north, right by the King’s Gardens (we literally had a castle in our backyard), and it was beautiful. Walking distance to everywhere but not smack dab in the middle of everything. It had the simple Danish design with a ton of natural light and a window opening up to a cute courtyard. We/I went to the King’s Gardens every day – there were cafés nearby and the Botanical Gardens as well. 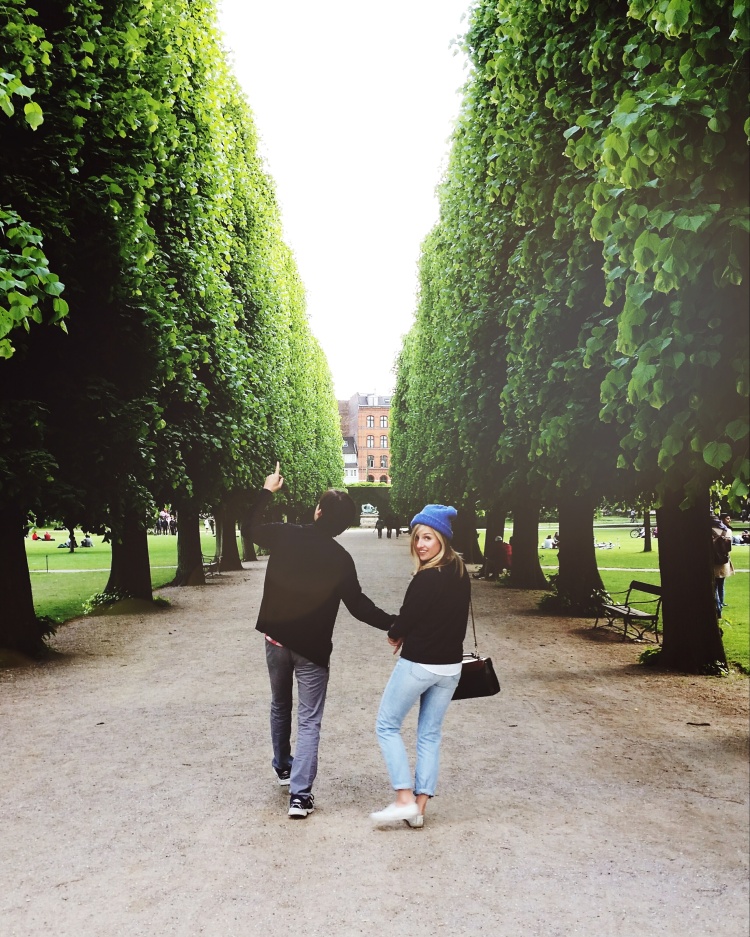 And from here I’ll try not to write a novel, but I’ll share what we did (first 2.5 days with my husband, the next 2 days solo).

After the initial dreamy wonderment at the cobblestone streets, colorful buildings, and bikes everywhere, we had dinner at Madklubben Vesterbro and coffee at Madklubben Steak – we couldn’t find a legit café open late! Opening and closing hours of places were definitely something to get used to after living in the states in both a big college town and a major metropolitan city where everything is always open. The Madklubben line of restaurants was recommended to me – I had the lamb, and man, the potatoes in Copenhagen were AMAZING. I also have to say every latte I had in Copenhagen was delicious (and I had alotta lattes). 😉 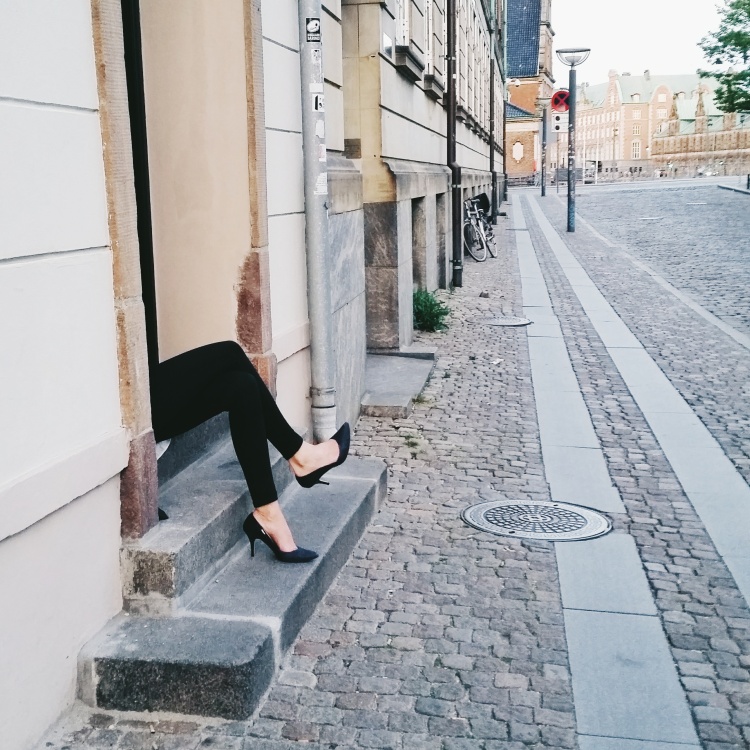 After some serious jet lag and early sunlight (4:30am!), we went to a cafe and rented bikes and spent the morning just exploring on wheels. We rented from our friends’ hostel, but really there are a bunch of bike rental places around the city. We went to see the famous Nyhavn and then wound up at Kastellet, a preserved fortress – you know, just adding to this fairy tale city. After a couple of us got separated, we had to wait until the other two got access to WiFi in order to find them. Eventually we did find each other at a café, and Whitney and I broke off to visit Tivoli – an old amusement park. It was beautiful but doesn’t have nearly the size of Disney (and it’s missing the Disney nostalgia, obviously). But it opened in 1843 (second oldest amusement park in the world) and carries with it that charm – definitely worth a visit. There were peacocks just walking around! Afterwards we went back to the AirBnB for a nap (first of many) before going to the top of Christiansborg Palace for a view of the city and heading to dinner. I planned on eating at Gorm’s (pizza) at the historic Magstraede street (one of the oldest in the city), but their electricity had gone out.  We ended up at Restaurant Puk for some authentic Danish food. Actually, we got their burgers, but burgers seemed to be a thing there, and they were really good. 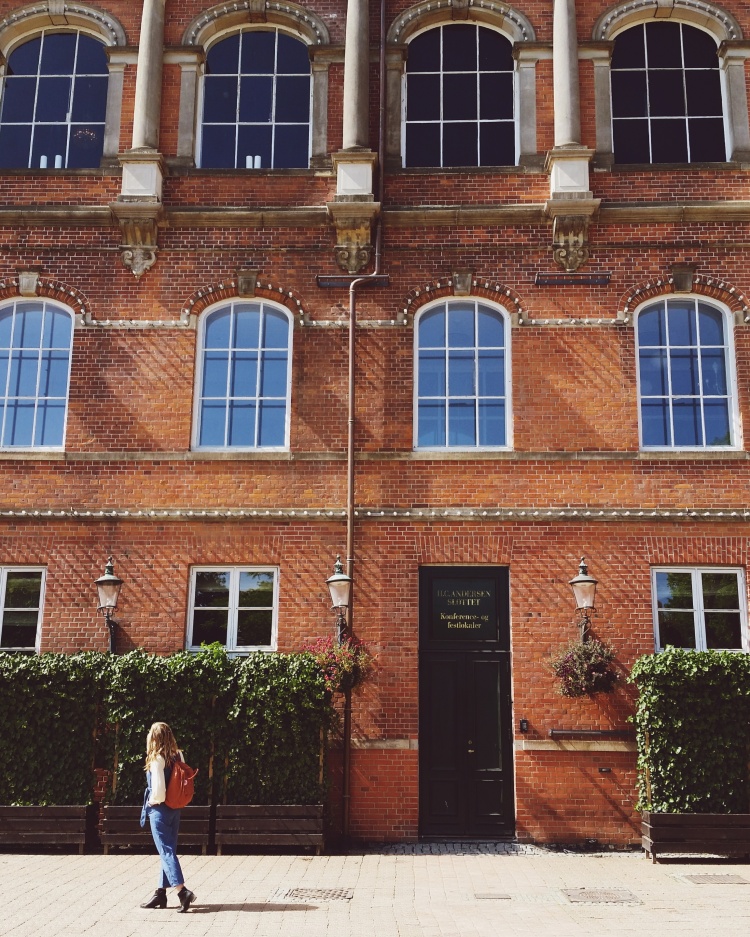 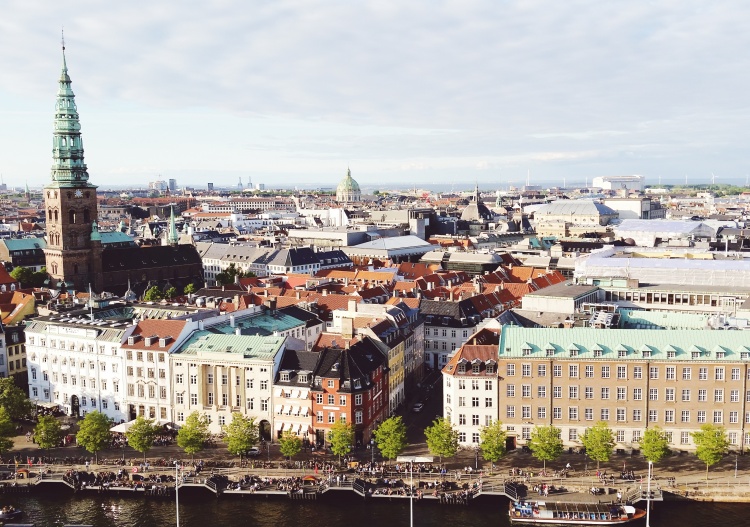 Had breakfast lounging in King’s Garden next to the castle (still can’t get over it). Got bikes again. Rode to the west side of town – Norrebro – to visit Superkilen (go there! on bikes!). This was probably the most unexpectedly fun part of the trip. Then we had a picnic in the Assistens Cemetery (yes, the cemetery also doubles as a park). I wanted to check out more of Norrebro, but after coffee failed to wake us up, we went back for a nap. That evening we got dinner at Copenhagen Street Food (like Grand Central Market in LA), had drinks at Ruby, and went to listen to music at a jazz club. 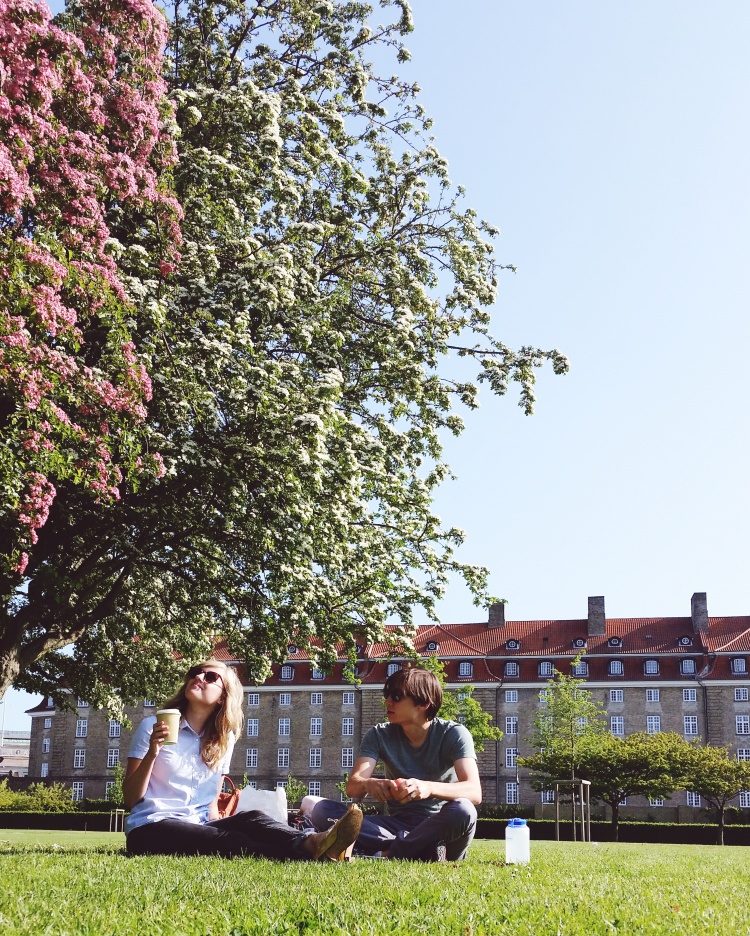 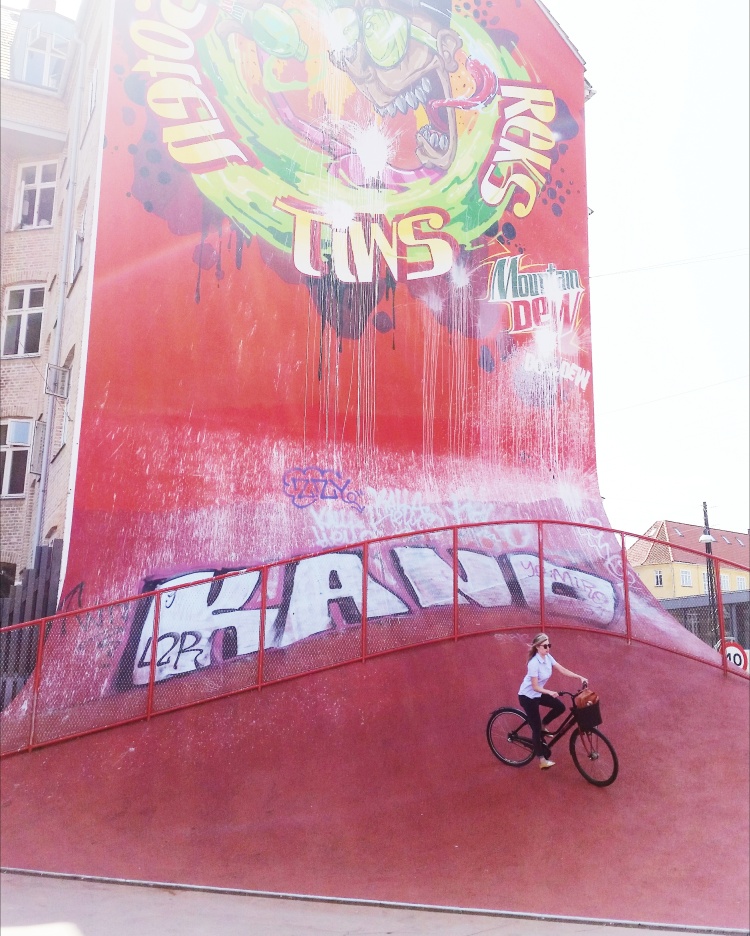 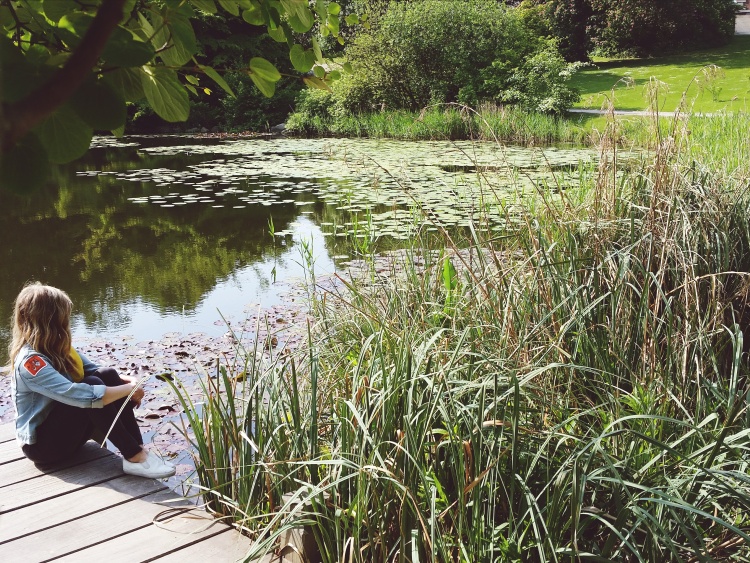 My first solo day. Originally I intended on taking a train to Odense (where Hans Christian Andersen lived), but was beat and decided to stay in the city instead (which in hindsight wasn’t a great idea because Mondays his house is closed, so I didn’t even make the trip out there). Instead I grabbed coffee and a chocolate croissant and walked and read in the Botanical Gardens (which was quiet and beautiful and the water lilies!). Then I rented a bike from Bike Rental Copenhagen (super easy, cash only, can return the bike up to midnight) and biked around for a bit. I ended up doing some shopping at Danish stores (both new and secondhand) and rested at The Living Room cafe (with a delicious tea). Got a hot dog at Andersen Bakery (I guess Copenhagen is known for hot dogs?) and biked by the Amalienborg Palace (where the queen lives) before taking a (yes, another) nap. Grabbed pizza and ate it at Nyhavn next to the water before heading back. 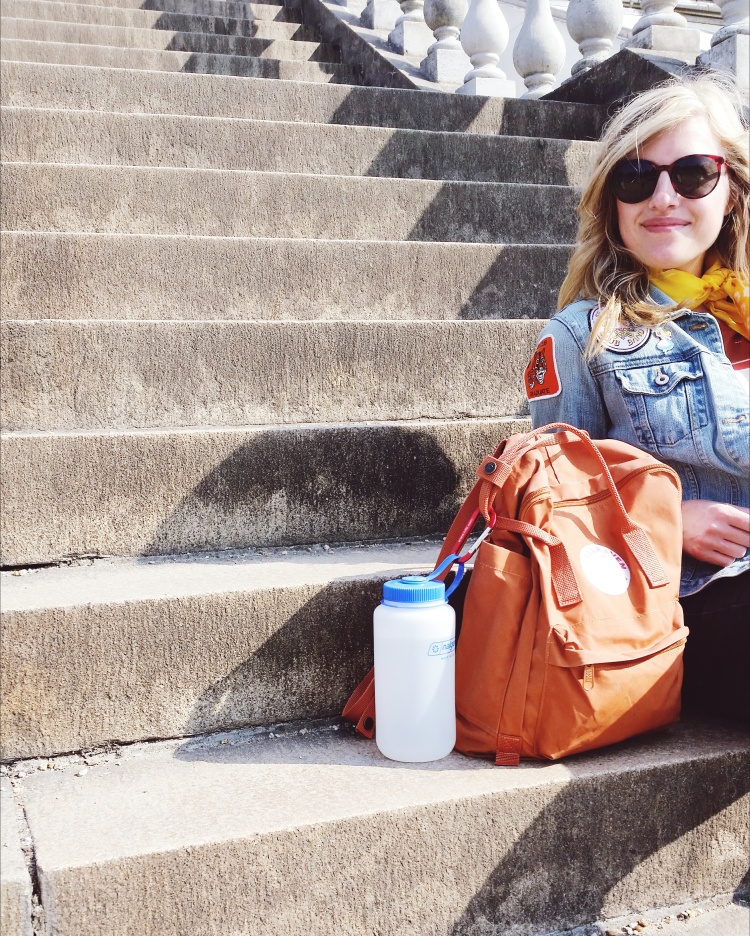 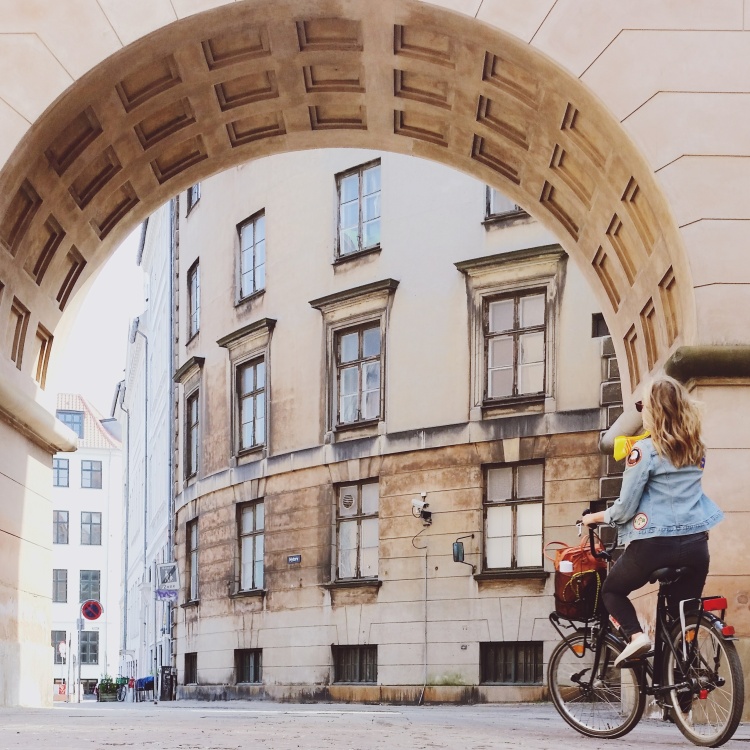 My Odense plans thwarted, I decided to head to the beach. I crossed the water to Christianshavn and had (another) latte and avocado toast for breakfast at Parterre. I stopped by Ganni Postmodern (famous Danish designer) and then biked about 20 minutes or so to Amager Strand beach. It was super windy, and I enjoyed just reading and watching the windsurfers for a bit. After a couple hours, I headed back to the city and had coffee and a pastry on the rooftop of the Illum at Original Coffee. Naturally I did some more shopping before heading back to King’s Garden to read, color, and relax in the late evening. I reheated up my leftover pizza and packed up before tearfully spending my last night in Copenhagen. 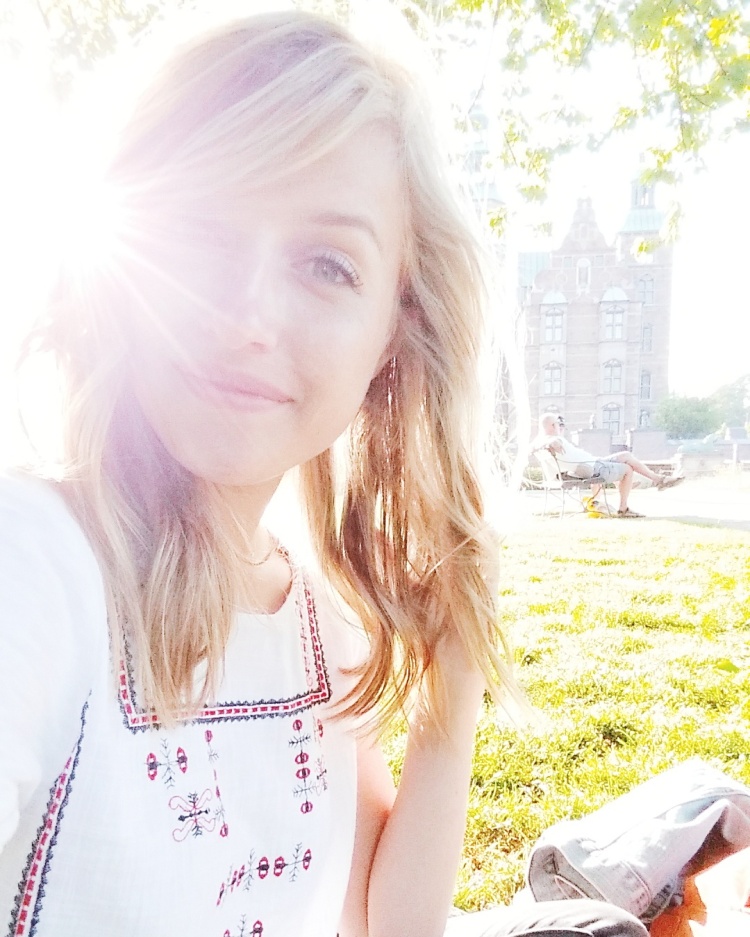 If you got through that novel, here are some of my other thoughts:

My Favorite Thing About The City: Biking! It was so quick/easy/convenient/fun. It’s basically flat everywhere, and so much of the population bikes that it’s absurdly bike friendly. Rent a bike your entire stay. Do it. Honorable Mentions: Cobble stone streets and colorful buildings.

My Least Favorite Thing About The City: A lot of people smoke. Everywhere.

The People: Blonde, tall, and QUIET. Whitney and I laugh because at the amusement park we’d hear a roller coaster go by with only one person screaming. And on weeknights, the city was so still and quiet. Apparently people stay in during the week, but the weekend is another story (I heard people coming home at 4:30am!).

Shopping: A lot of places were closed on Sundays, and retail employees are really accommodating. I’m weird and like to be left alone when I shop, so I just felt really pressured and then felt really bad when I didn’t buy something. Originally I assumed I’d do most of my shopping in Paris, but I actually did most of it in Copenhagen and came home with some classic pieces I really love. I love the minimal, sleek design and silhouettes of Danish clothing.

Cafés: They don’t open as early as in the states (unfortunately when I woke up with my 4:30 am jet lag) and don’t stay open as late either.

Things I’m Sad I Missed: playing board games at Bastard Café, taking the train to Odense, shopping/exploring more of Norrebro.

Advice for Your Stay: Stay at an AirBnB, visit during the week days, and rent a bike your entire stay. Copenhagen is one of the pricier places to visit (though not compared to Los Angeles), so it’s clean, and I always felt very safe (perfect city to solo travel). 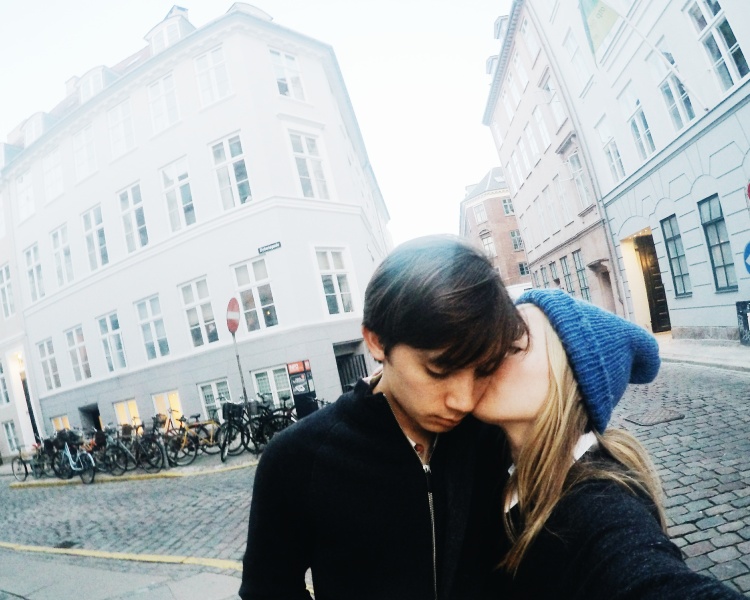 I pretty much fell head over heals in love with this city. It was the perfect first stop to initiate my first ever Euro trip. I haven’t been out of the country since I was young, so experiencing a culture that wasn’t American and seeing so much history everywhere was fascinating. Sure, I felt a bit embarrassed that I didn’t know the language (though everyone spoke English), but I did get mistaken for a Dane several times! It’s a small city, and maybe some people would rather the grandness and chaos of some of the big tourist destinations in Europe, but Copenhagen has my heart. ❤